My Name is Maximus Decimus Meridius

One of my favorite lines in one of my favorite movies is when "The Spaniard" reveals his true identity to Rome's new, evil Emperor. They're in the middle of the Colosseum in front of thousands of Roman citizens. The Spaniard is slave, but his fame has risen as a leader of the gladiators, defeating soldiers who possess the best training and weapons.

The build-up is palpable as the Emperor makes his way down to the sandy Colosseum floor to hear the name of this doomed hero. After telling the Emperor that his name is "gladiator," he turns his back to him.

"How dare you turn your back to me?! Slave! You will remove your helmet and tell me your name."

The music builds. The helmet comes off. The gladiator slowly turns.

"My name is Maximus Decimus Meridius, commander of the Armies of the North, General of the Felix Legions, loyal servant to the true Emperor, Marcus Aurelius. Father to a murdered son, husband to a murdered wife. And I will have my vengeance, in this life or the next."

Chills. Wide eyes. Willingness to follow this guy with a crazy long name and traumatizing past.

If you haven't seen the movie Gladiator, you should. It's much more than an action movie and the story holds even after 20+ years. Maximus displays the characteristics of a leader. He's smart, loyal, focused, disciplined, honorable, committed, honest, and proven on a literal battlefield. His men reflect the qualities he lives out.

I want to be like Maximus. And in my best moments, maybe I am like him. However, I've always had this other side to my personality that didn't seem to jive with a bloodied warrior.

For example, I bet Maximus didn't ever hope his joke would produce a spit-take. Or hide for 10 minutes to scare his kids. Or ask his Pastor about dinosaurs. I do, though.

Which leads to a fun discovery:

Leadership is about influence. Influence is NOT predicated on one personality trait.

Before I jump into the three traits that I think get overlooked when talking about leadership, I have to give credit. These qualities were brought to my attention because of the loving people around me.

I suppose I did my part by showing up and showing interest, but several people have helped articulate qualities in me that they saw as valuable. Left on my own, it would've been a much longer road of discovery.

Here they are: Curiosity, Whimsicalness, Deference

Kids ask a lot of questions. Sometimes it'll drive you bonkers as a parent. (No. We still aren't there yet.) But somewhere along the way, we grow up a bit and grow out of being curious. At least not bold enough to follow curiosity beyond a Google search or two.

One of my favorite tools is wordhippo.com, a more fun thesaurus. There were a bunch of helpful examples on that site, based on context. Below is a screenshot. 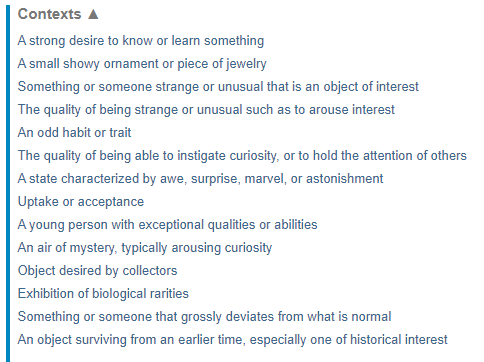 Curiosity in your workplace might look like someone asking "what if" and "why not" type questions. However, it could also be someone who doesn't take "it's how we've always done it" as a satisfying answer.

Chasing curiosity without direction can get lost in a jungle surrounded by Narcos. However, with oversight and encouragement, curiosity can lead to discovering the Post-it note.

Recently I was asked to give a 5-minute talk at my church, basically recapping an initiative from the previous year. During the monolog, I stopped and turned to a Pastor friend of mine and said, "how am I doing? Am I good for another minute?" It wasn't planned, and I wasn't going for a cute moment. It just felt right. I was excited about the topic and sharing from the heart, and when that happens, I tend to ramble.

Afterward, I thought about that moment and wondered if I had come across as aloof or disrespectful, but I didn't say anything. Later that night, I got a text from one of the elders saying, "thank you for sharing tonight. You did an excellent job of representing Beth and speaking winsomely about the effect the Word has had on your relationships."

Those few sentences meant a ton to me.

Then I looked up winsome(ness) because I figured it wasn't what I was thinking. (Did he thank me for being Tinker Bell?) Again, from wordhippo:

Dang. Not only was this sage encouraging me with his text, but with a single word told me it had attractiveness to it.

Winsomeness in your place of work could look like a person who interjects an unexpected funny story when discussing their yearly business plan. But, it's also someone who takes pride in not just what is presented but the aesthetics of the presentation itself.

Another example is that colleague who, after asking the waitresses name, tells her, "You know what, Shelly, bring me your favorite dish but don't tell me what it is."

The winsome among us see adventure in small things, sprinkle charisma into daily conversation, and fold us around them into the story. (and often we love being in the story with them because they see the world in such an optimistic light)

After hearing this word used to describe someone, I respected, I, of course, looked it up. I found that the quality of deference seems to underpin the action of servant leadership.

Deference is the first cousin of humility.

Deference could look like restraint from the most talented or most experienced to benefit those who need an opportunity. You could take the lead that just came in, and you'd nail it. But knowing that your colleague (and ultimately the company) would benefit from getting more reps, you pass it to the less experienced.

This quality shows in mentors, teachers, good bosses, parents, soldiers, nurses, and a dozen other roles. Maximus was a 'loyal servant of Rome.'

It's more than being nice. It's nice--with a backbone and a telescope. This person likes to say 'yes' to requests, but they aren't a doormat. They'll hand you a cup of coffee and will also help keep you from running the ship into an iceberg.

Are you lacking creative ideas for bringing on new customers or donors? Set up a brainstorming session with the curious and winsome. Put them in a room with a whiteboard, some coffee, a few open-ended questions, and see what comes out of it.

Don't have the money for a manager but could use the help? Investigate the possibility of having a Team Lead (player/coach). Deference will be your friend here. Not the only quality needed, but a great place to start.

Gladiator is one of the best movies of all time. And leadership is influence. We'll overlook outstanding leadership if battle-tested, deep-voiced, bloody-faced warriors are all we hope for.

If you're looking to take your growth as a leader to the next level, we've got you covered. Join the Impact of Leadership Community today!

0
Transformational Leadership-Episode 52 with Tod Bolsinger
0
Happy New Year. Now Fire Yourself!
My dad taught me that it’s important to fire yourself at the end of the year, wait 10 seconds, soak up that horrible feeling, and then rehire yourself. Why in the world would my dad tell me to do this each year?   Give yourself a scare and new outlook. It’s better to pretend to fire yourself before it happens for real. Now strategize! What would you do differently if you were fired and rehired for the same job? You can’t grow to greater success if you don’t look at your failures and change them.   Yes, my dad could have been a Jedi Knight because he motivated himself and others through mind games. Most of those mind games made him and others extremely successful. I thought he was crazy when I was younger. Now I try to do everything he taught me.   It’s better to pretend to fire yourself before it happens for real.   When people get comfortable, they can become lazy, which can lead to poor results. Poor results can eventually lead to one being fired. Don’t wait for that awkward and regrettable moment. I’ve never met anyone that enjoys losing. Go ahead and make that awkward firing moment happen on your terms. Write yourself a termination letter and put reasons behind it. Punch yourself in the gut(words not literally) and make it hurt so you can learn.   What would you do differently if you were fired and rehired for the same job?   It’s so important to motivate yourself to think about new strategies to prevent becoming comfortable. You want to drive in better results every year, but you don’t change anything. How is that working for you? Nothing changes if nothing changes! If you had a record-breaking year…good for you…now get over it. No one cares what you did yesterday, last year, or five years ago. Business is about what you produce month-over-month and year-over-year. People don’t get fired because they are growing. People get fired when they get lazy or stop taking initiative to learn. How can you continue to push yourself to prove to everyone you are not playing it safe? What must you do to grow your success?   ACTION ITEM: Take 15 minutes and make a strategic list. Make sure you put these strategies into practice by putting each one on your calendar.   You can’t grow to greater success if you don’t look at your failures and change them.   No Time Management Your day is chaos. You feel no control in your day. You feel like nothing ever gets done that you want. Poor Communication You hold people to expectations that you did not share with them. People don’t live in your head. Use your words! No routine Schedule your work duties, and don’t get distracted. Give yourself time to think. Make sure to take PTO and recharge your batteries. Boring Meetings No one is excited to be there. No conflict. Watching the minutes for it to end. Talk Too Much – Poor Listening Don’t dominate the conversation. Make sure you shut your mouth and open your ears to hear what others have to say. Show respect to others by listening. Too Many Excuses For Missing Deadlines Nothing is worse than a boss demanding deadlines but the boss lives by double standards. Get your work finished on time. Set the bar with your actions. No Humility Say the words “I’m sorry!” and “It’s my fault!” No one wants to follow a leader who is arrogant and full of pride. Lack of Passion Zap your heart and get excited about your work. No one wants to follow someone who is lukewarm or passive. No Accountability You need someone who will speak TRUTH into you. Make sure to ask others how you are doing and listen to their advice. Broken Trust With Failed Promises Let your YES be YES and your NO be NO. Follow through on your commitments, and show up in mind, body and spirit when you arrive. Need more?  Book us to speak at your next event, and we’ll light it up! Check out our YouTube and LinkedIn pages for more encouraging content.   If you’re looking to take your growth as a leader to the next level, we’ve got you covered. Join the Impact of Leadership Community today!